The chased silver tazza or drinking dish is resting on a knopped stem above a chased foot. The foot and stem are decorated with floral ornaments. The stem has three cast volutes with griffins. The circular dish has a flat rim with a band of stars and flower heads below, alternated by flutes and volutes on a granular ground. The centre is filled with a raised geometric pattern of pointed shapes encircled by a beaded border.

The vase-shaped knop of the stem is richly decorated with three chased flower heads. Above and below this knop are two smaller knops that curve slightly inwards and that have plain and engraved elements, the lowest knop has an aperture.

The footrim is decorated with characteristic Renaissance ornamentation such as flat ovals. The domed foot is finely chased with cartouches enclosing flowers.

A tazza was used as a drinking bowl. The flat rim was meant to hold against the lips. The lack of decoration means that it feels pleasant to the touch. The scalloped shapes in the centre of the dish reflect the light. The polygonal shapes make this a spectacular view. The drinking dish already existed in the Middle Ages in the Netherlands and was probably already used during Roman times. We know that these dishes were used as drinking vessels from earlier old Dutch descriptions of these objects: vat dat eyn schail heit umb wyn uyt teo dryncken (‘vessel that has a dish to drink wine from’).

The drinking dishes were probably mostly made from earthenware, pewter and glass, but dishes in silver already existed in the 16th and 17th centuries. The word ‘tazza’ comes from the Italian language and was not used in the Netherlands in the 17th century. In those times these dishes were indicated by the name ’coupetasse’ or ‘copschaele’. Both the dish and the slightly later tazza were difficult to use as drinkware. Only with careful sips, the liquid did not spill over its edge. Drinking from a tazza required practice and therefore was the proof of a good upbringing. The wine drinker held the footrim between his thumb and fingers and carefully brought the dish to his lips. Because the tazza was not easy to use, it had multiple purposes: it was not only a drinking dish but also a dish for fruit, sweets, cakes and bread or even an offering dish. The silver tazza was a status symbol and was mainly used during representative events. The various guilds, regents and water boards, but also Lutheran churches often owned silver tazza’s.

Unfortunately, its maker’s mark is not identified, although the mark was formerly attributed to Abraham Gallus. The maker must have been a specialist in tazza’s. At this moment, three tazza’s by his hand are known. 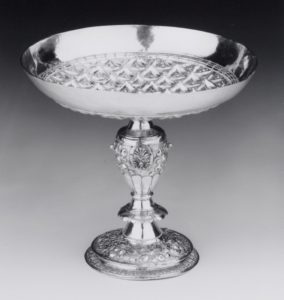 The Amsterdam Museum owns a tazza from 1616 bearing the same maker’s mark and that used to belong to the St. Anna Guild, the Guild for the seafarers to Norway. It is certain that the tazza belonged to this guild because the guild was never terminated and kept the tazza until they donated it to the museum in 1982. This shows that objects belonging to a guild were not always inscribed or engraved with a coat-of-arms. This tazza is relatively small and has a similar pointed dish.

With these words this special tazza is promoted in the sales catalogue of auction house Frederik Muller in 1905, where on 21-24 November the collection of the Amsterdam art dealer Julias Boas Berg was sold. Julius Boas Berg was a well-known name in the circles of the Amsterdam art dealers around 1900. His small shop on the corner Kalverstraat/ St Luciensteeg was filled with the most precious objects. Connoisseurs knew that here one of the most important art dealers of the past century was located. Boas Berg was known as an art dealer of the most rare and precious artefacts, according to an article in the newspaper Groene Amsterdammer of 1905. 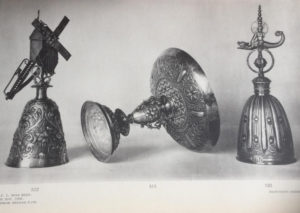 And indeed, his objects were rare. Many objects that he had in stock were loaned to the Rijksmuseum or to Arti et Amicitiae to be included in exhibitions. In this way, he hoped to find a buyer more easily. Many of the objects in the silver exhibition of 1880 in Arti came from his collection. Eventually, many of his treasures found their ways into the collection of the Rijksmuseum.

Tazza on paintings by Heda

Silver objects are frequently depicted on paintings: salt cellars, drinking ewers, dishes, as well as tazza’s. Surprisingly, tazza’s are rarely depicted together with the people who used them. Occasionally, we see an allegorical scene of Bacchus holding a filled tazza. A genre painting with a drunken man with a tazza, as is shown on the painting The Prodigal Son by Gabriël Metsu, in the Hermitage in St. Petersburg, is a rare scene in the 17th century.

We do see tazza’s as loot or gift in historical paintings. They are also often depicted in still-lifes. Masters as Pieter Claesz and Willem Claesz. Heda in Haarlem, but also masters as Osias Beert, Maarten Boelema and Jacob Marrel all used tazza’s in their compositions. 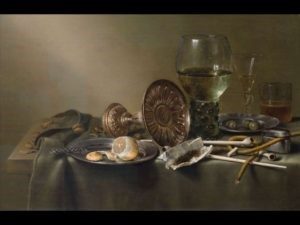 Highly remarkable and interesting are the many similarities between this tazza and the ones that are depicted on the paintings by Willem Claesz. Heda. On various paintings by this Haarlem master this tazza -easily recognisable by its flutes and stars in the dish- is depicted lying on its side.

Willem Claesz. Heda was a Haarlem painter of breakfasts or banquets as his still-lifes were already called in the 17th century. He was active during a period of circa 40 years and is known as the master of reflection of light on flat and shiny material. The glass roemer, the pewter ewer and especially the lying tazza, were outstanding motifs that allowed him to demonstrate his skills.

The Rijksmuseum in Amsterdam, the Museum Boijmans Van Beuningen in Rotterdam and the National Gallery of Art in Washington all have paintings by Heda with this silver tazza.

In the standard publication A modest Message by N.R.A. Vroom, a list of the works that are attributed to Willem Claesz. Heda is included organised by date. It is remarkable that the works that depict this tazza are all made in the short time frame of 1632-1636. Thereafter, the tazza appears only once on a painting from the 1650s. This leads to the assumption that the painter had the use of this tazza during a certain period in his studio to paint it.

In his article in the Stavelij about silver on paintings, written in 2004, Hugo ter Avest researches the question whether the silver that is depicted on paintings did exist and whether these objects were owned by the painters themselves. Most of the time, the painters would have known the objects, yet they rarely owned them. The way in which the silver was depicted tells us whether they were painted after a real model. The highlights that imitate the specific reflection of light on silver were rendered in a more realistic way when the painter worked from a real-life object. The realistic rendering of Heda’s tazza and the similarities of the details, tell us that it is evident that Heda had the tazza in his studio for a certain amount of time.

Another example is the famous auricular jug by Adam van Vianen from 1614 that is depicted on plenty 17th century paintings. Studying these paintings, it is immediately clear that the painter did not have the actual jug in his studio. For once, the jug is depicted in various sizes. It may be possible that the painter had seen the jug once or twice and was impressed by it. The jug was probably painted based on a memory or a print.

This is clearly not the case with the tazza since the details and the reflection of light are well painted. In the further course of his career, Heda painted many more tazza’s, however not this exact model that is easily recognised by the alternating chased flutes and stars in the base of the dish.

On two paintings two small differences with the tazza are detectable: the supporting dish, a lid on the base of the cuppa and the droplets that suspend from rings on the stem, are lacking. Most likely these were lost during the past centuries, as is the case with almost all silver tazza’s.

A jewel with four loop shanks, to allow fastening to a hat or other apparel with thread. The…