In the centre of the bowl a silver medal, depicting the creation of Eve is mounted. As early as the thirteenth century it was customary to drink beer from wooden bowls. The use of such drinking vessels remained popular for more than two hundred years, to be eventually replaced by other types of cups.

An unadorned wooden cup (Rijksmuseum, inv. no. NG-NM-7791-1) was found on Nova Zembla, providing evidence that such drinking utensils were still part of a ship’s inventory in 1596. The mazer bowl or lage kroes differs from a regular small bowl because of its wider and slightly deeper form. During the Middle Ages, it was generally used for drinking by the common people. It was made of wood or earthenware.

Plain, unadorned examples are depicted in Northern Netherlandish paintings of the time. Several of these are visible in the Refreshing the Thirsty panel from the polyptych with The Seven Works of Charity by the Master of Alkmaar in the Rijksmuseum, for instance. Very few of these wooden drinking bowls have survived the test of time. Only the more luxurious, richly decorated examples with silver mounts have been preserved,most of them originating from the property of guilds or monasteries. Peculiarly enough, it was especially in England that about eighty mazer cups were
conserved. As early as 1887, the object was comprehensively discussed in an article in the journal Archeologia, or Miscellaneous tracts relating to antiquity. Many of the mazer bowls described in this article included a Latin text on the silver lip, presumably because they had been the property of a monastery. Two of these featuring English texts must be mentioned here as they lucidly clarify the function: ‘En the name of the tirnite fille the kup and drinke to me’ is inscribed on the band of one of these cups. The other cup has an inscription that reads ‘on to all that drinkis of this cope’.
In England, Mazer cups slowly came into use after the conquest of William the Conqueror in 1066. In the Bayeux Tapestry, which depicts the conquest and the Battle of Hastings, one can see early versions of the mazer cup in use during a meal. From then on, the cups were not just utilised on the mainland, but became common across the channel in England as well. The drinking bowls were soon decorated with carvings or silver mounts, a small foot or a lip around the edge and the bottom inlaid with a silver medal. During the first half of the sixteenth century, these decorated wooden drinking cups were still very conventional. They often appear in inventories: ‘1532, t silver van een houten coppeke, houten cop beslagen met silver vergult’ (1532, the silver of a wooden cup, wooden cup mounted with gilded silver), ‘1538, 3 holte koppen die een dat decksel myt silveren benden ombtregen’ (1538, 3 wooden cups with silver bands mounted around the lid). 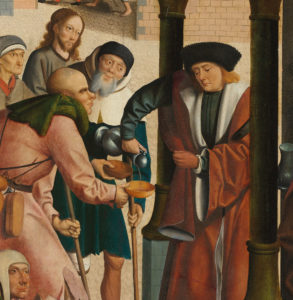 By the mid-nineteenth century, this 1547 mazer bowl had already been described as a rare porridge bowl featuring an inscription. Reading the above, we now know that the object in question does not concern a regular bowl for eating, but that it was in fact used for the consumption of beverages. Apparently, this information had already been lost by the 1850s. Not only an exhibition in 1858 but also Het boek der opschriften (The Book of Inscriptions), published in 1869, describes the mazer bowl as a porridge bowl. The authors Van Lennep and Ter Gouw probably used the 1858 exhibition catalogue and interpreted it as follows:
“Even a porridge bowl had to have an inscription. In the city of Zwolle, another is kept of wood  with silver mounts. The creation of Eve is depicted on it; Probably because it was understood that Eve did not have a mother, and, therefore could not have been raised without the porridge bowl. Below the image, one can read:

The spelling shows that this ode to the porridge bowl dates from before the 18th century. So the poem is not by Feith [Rhijnvis Feith (1753-1824)]. But to whom was the reprimand addressed? To the child who was fed from the porridge bowl and was not permitted a to take on a sour expression when the maternity nurse also had a taste? – Or to the nurse, who was not allowed to envy the sugar in the child’s porridge, which she would prefer to stir into her coffee.” When we ignore the fact that this is not a porridge bowl, the above attempt at clarification actually provides us with
an amusing anecdote. The medal at the bottom of the cup features an image of the Creation of Eve which is based on a contemporary print by Heinrich Aldegrever.

However, the text on the bowl, together with this image, should be interpreted as a reference to the Fall of Man rather than having a connection with the porridge that, according to Van Lennep and Ter Gouw, Eve had consumed. The rhyme should therefore be read as: Whoever envies other people’s profit – that is not good – he maliciously wastes his time and torments his body (bloet = blood, which equals heart, which refers to the body), so be it. In other words, don’t be jealous of what someone else has. It is only a waste of time.

This bowl was probably once the property of a monk who was warned to not succumb to envy of earthly matters. Or, it may have belonged to a brotherhood in which the members who drank from this cup were instructed to refrain from becoming jealous of each other. The description of English mazer cups mentioned above also recounts how such a bowl was passed around among the brothers after prayer each evening. That a religious function for the cups is not to be overlooked is apparent from the various English mazer cups that are characterised as ecclesiastical property. They were often decorated with the coat of arms of the donors, but at times also bore inscriptions such as ‘Of Godess hande blisset he be that taketh this Cuppe and drynketh to me’
(He who drinks from this cup is blessed by God’s hand).
This mazer bowl was shown at the 1858 exhibition Voorwerpen uit vroeger tijden (Objects from Earlier Centuries) as the city of Zwolle’s contribution, registered under number 1902. Eleven years later, Van Lennep and Ter Gouw mentioned that the bowl was still kept in Zwolle. In 1882, on the occasion of the twenty-fifth anniversary of the Vereeniging tot beoefening van Overijsselsch Regt en Geschiedenis (provincial historical society) an exhibition was held. One of the main contributors was the city of Zwolle. The objects that were shown as the property of the city of Zwolle in 1858 all appear, with the exception of the 1547 mazer bowl. The successful exhibition, which attracted more than 11,000 visitors, resulted in the establishment of the historical regional museum, Geschiedkundig-Overijsselsch Museum, the forerunner of the present Stedelijk Museum Zwolle. In 1886, the city donated several of their previously loaned objects to the museum. The mazer bowl is absent from that list. This confirms the hypothesis that the bowl was no longer in the city’s possession by 1882.

Provenance
Municipality of Zwolle, before 1882;
The property of a lady, Her sale, Christie’s Amsterdam, 27 April 2004, Lot 274;
Private collection, Belgium

A jewel with four loop shanks, to allow fastening to a hat or other apparel with thread. The…