A jewel with four loop shanks, to allow fastening to a hat or other apparel with thread. The glass and crystal are set in a gold mount that is decorated on the reverse with an engraved geometric pattern of flowers and birds. The front features the coats of arms of Archduke Albert VII of Austria, in colour and surrounded by the chain of the Order of the Golden Fleece, which he received in 1596. Inscribed in Latin:

Around this a circle formed by the coats of arms of the Seventeen Provinces, their
name above each. On the reverse the following inscription:

Albert VII was married to Isabella Clara Eugenia, daughter of Philip II of Spain. They became Sovereigns of the Netherlands in the middle of the Dutch war for independence from Spain, The Eighty Years War, which began in 1568. The conflict in the Northern Netherlands had been raging for several decades. During this time, Protestants had fled from the Southern Netherlands to the North. After the fall of Antwerp in 1585, half of the population had left the city and the Southern provinces, including countless merchants and skilled craftsmen. Although Philip II resided in Spain and had not visited the Northern Netherlands in years, he still regarded the territories as his own and demanded they be called to order. Vice versa, the men up North saw it as their duty to oust the tyrant from the Southern Netherlands. Because of this, the fighting continued regularly in Brabant and Flanders during the 1580s and 1590s. The above is a short sketch of the situation in which Isabella and Albert came to power. In 1598, Philip II had sensed his approaching death and had called the Act of Cession into effect. In it he gave sovereignty over the Habsburg Netherlands as a wedding gift to his beloved daughter and her then future husband, Albert. The kingdom of Spain was left to Isabella’s half-brother Philip III. 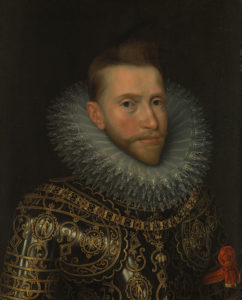 However, this wedding gift came with a plethora of requirements and conditions. For example, should the couple die without a legitimate heir (as would indeed be the case), the Netherlands would again fall into the hands of the Spanish king. And, each time a sovereign was succeeded in Spain, the new king would be obliged to confirm this so-called Act of Cession. Philip II’s separation of the Netherlands from Spain was therefore somewhat half-hearted. And yet, Isabella and Albert’s arrival in the Southern Netherlands was celebrated as if it was a true sign of a positive turning point. The Archdukes, so called because of their status as Archduke and Duchess of Austria, would help the Southern Netherlands regain its high position and prosperity. Such was the hope of the people. That hopeful expectation was clearly displayed by the cities during the couple’s Joyous Entries (Blijde Inkomsten), festive ceremonies for visiting new rulers, which served to confirm and reinforce the mutual relations. In Leuven, Albert and Isabella were welcomed by the Virgin of Brabant carrying a horn of abundance in her hands; she was accompanied by personifications of Peace and Justice. There was also a performance enacting the story Andromeda, the princess from Greek mythology who was punished by the god Poseidon for the boastfulness of her vain mother. The innocent daughter was chained to a rock to be ravaged by a sea monster – the same monster that would also cause her parents’ land to crumple under tidal waves. The people of Leuven were informed that the performance bore a clear political message: Andromeda symbolised Belgica, or, the Southern Netherlands. She risked becoming the victim of arrogance, which had been the trigger for the Revolt in the North. However, salvation would come for Andromeda: during the act, the hero Perseus soared to the rescue on his winged horse Pegasus. The public was fully aware
that the hero and horse together signified the Archdukes. They would save Andromeda, who married Perseus and bore him many children. The Southern Netherlands would prosper once more; all is well that ends well. With thanks to Perseus and the Archdukes.

This gold jewel was presented to Albert VII by the prior of the Abbey of Saint Amand at the time of the Joyous Entries, with similar political intentions. The monastery hoped for a reunification of all the provinces, which is why all seventeen of their arms are represented on the jewel. An influential factor for the presentation of the gift must have been the fact that, at the end of January 1600, Pope Clement VIII had granted the Archdukes the privilege of appointing all priors and prelates in the Netherlands. This so-called indult allowed the government great influence in ecclesiastical matters.

Franciscus Richart, the maker of this exquisite piece of jewellery, was a prior in the Saint-Amand Abbey. It was one of the most important monasteries of Hainaut and Flanders and was located in what is now Saint-Amand-les-Eaux in Northern France. This village gradually rose up around the abbey, which was founded in 647 by Amandus of Ghent, on the royal estate of Elnone, donated to him by his friend King Dagobert I. The complex was almost completely brought to ruins during the French Revolution. The Baroque tower of the church (1626), designed by the architect Nicolas du Bois, is all that remains of the Benedictine abbey. Sadly, its sculptures were destroyed during the revolution. However, the exquisite former entrance complex in the Flemish Renaissance style survived and now houses the Town Hall. Franciscus Richart is mentioned in a list of the Abbey of Saint Amand’s clergy. This record was drawn up between 1575 and 1582 by the monk Baudouin Denis and the list was published by J. Mangeart in 1860. It describes Richart as versatile and practical and also mentions that he was an artist.