The oval gilt-brass pre-spring verge movement with engraved pillars, gut line fusee and worm and wheel set up, the oval dial set in an octagonal gold mount decorated with cloisonné and champlevé enamel tulips and butterflies amongst leaves in colours of blue, green and orange, all against a white background, the circular gold chapter ring with black enamel Roman numerals centred by a gilt floriate hand, the inner border to cover and case decorated with translucent green enamel over an engraved ground, the case of facetted rock crystal in engraved and gilt bronze mounts, the bezels and pendant decorated with opaque green enamel.

Few enamel cased watches have survived from this period, and a proportionately high number of extant examples have had their original movements removed or replaced.

By the beginning of the 17th century there were a number of foreign clock- and watchmakers working just outside the control of the City of London, particularly in the area of Blackfriars, one of the so-called ‘liberties’. Many of these ‘strangers’ were Huguenot refugees from France who were particularly accomplished in the art of engraving, enamelling and lapidary work. Their existence so near the City had such an effect on the established london clock- and watchmaking trade that a petition, raised in 1622 by a group of watchmakers in the Blacksmith’s Company, was sent to King James I in an attempt to prevent them from trading and to establish a Livery Company for the Clock- and Watchmakers of London. David Bouquet is first recorded in that petiton, where he is described as ‘David Bowkett at Mr Samsom’s house with two apprentices’ (presumably Sampson Shelton, member of the Blacksmiths’ Company) and living in Blackfriars. He became a Freeman of the above Company in June 1628 and subscribed an unspecified sum towards the incorporation of the Clockmakers company in 1630 (as Mr. Bucket), later being made a Free Brother in the Clockmakers Company in 1632, in which he became assistant from 1634 to 1665. Bouquet’s work comprises mainly watches, but some lantern clocks by him are known and can be found in the British Museum and the Victoria & Albert Museum. He specialised in richly jewelled and enamelled watches.

Bouquet was a prominent member of the Hugenot church and served as a warden at the French church in Threadneedle Street for four periods of three years each, between 1637 and 1662. He had three sons, David and Solomon, who both became watchmakers and Hector, who was apprenticed to the diamond cutter Isaac Merbert. Bouquet continued to run a prolific workshop with numerous apprentices in Blackfriars until his death in 1665, a year before the great Fire of London. 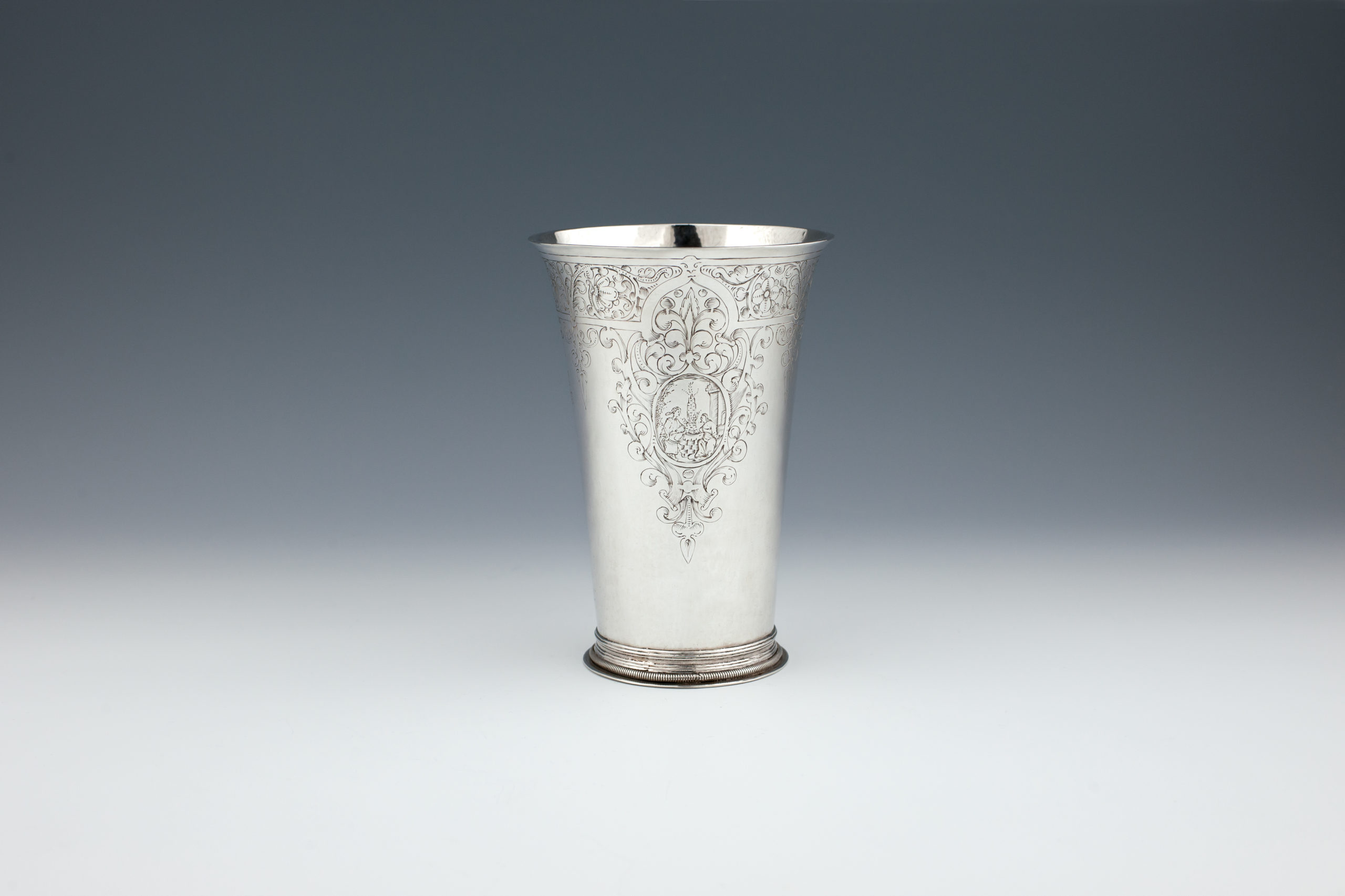 A finely engraved beaker from Franeker

A trumpet shaped engraved silver beaker, the slightly spreading base with reeded and corded rims, the upper part… 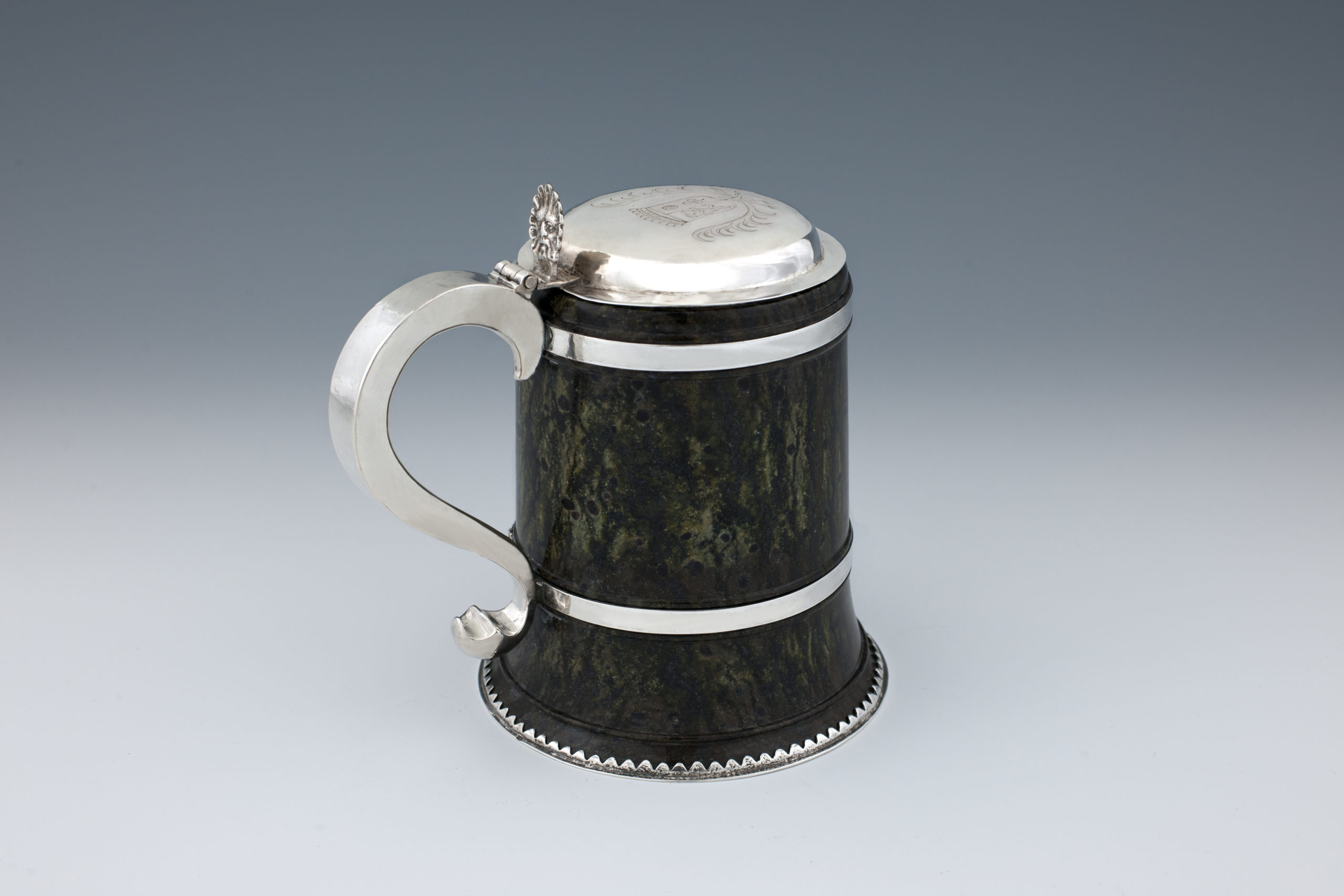 The body of circular section, on ringed spreading foot applied with serrated silver mount, the smooth body with… 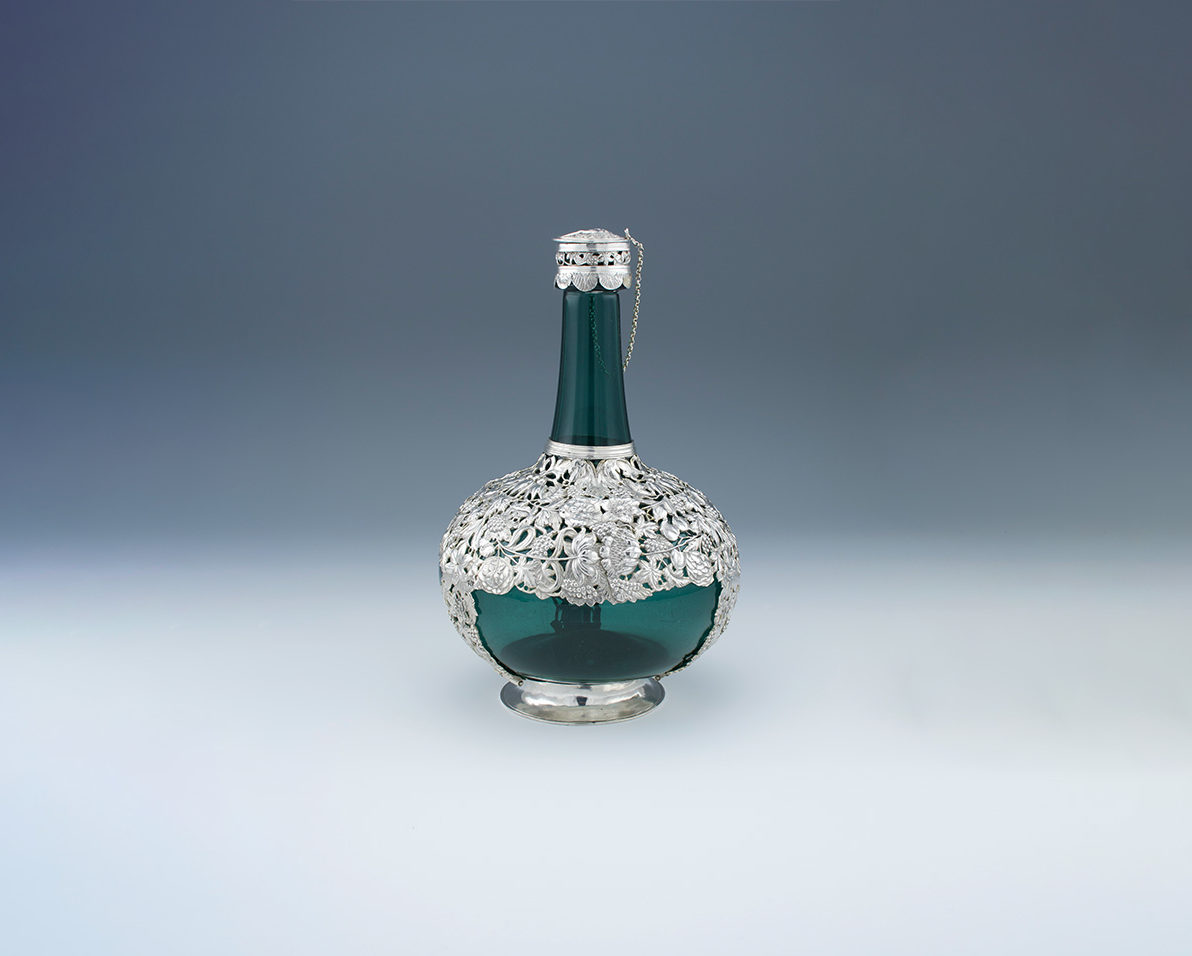 A bottle of green glass on an plain silver base rim, the upper half of the body is…