A mother-of-pearl veneered tea chest, decorated with carved motifs of birds on flowering sprigs, leafy vines and flowers. The lock plate is in the shape of a lotus blossom. With a silver hinge and four silver feet. Contained in the chest are three silver caddies with exquisite rococo lids. 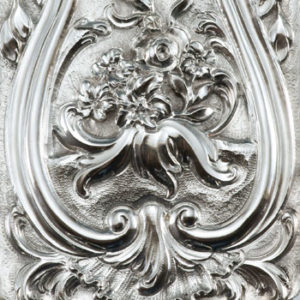 The precious mother of pearl of this exceptionally handsome tea chest was crafted in Canton. At the time, China was closed to the outside world. Trade with China was carried on via Canton, where the Portuguese (from 1517), English (from 1715), Dutch (from 1729), Danes and Swedes (from 1731) and French (from ca. 1736) had comptoirs. It is quite likely that the mother of pearl of this
chest was produced on order. The chest was assembled in the Netherlands, where the tea caddies, silver feet and hinge, all by the Rotterdam silver smith, Rudolph Sondag, were also added. The hinge and feet are decorated with flowering sprigs, a natural motif which harmonises perfectly with the Chinese mother-of-pearl carvings of foliage and bird motifs.

The superb rococo decoration on the silver lids, featuring flowers and S-volutes, from which leafy vines shoot, mark a high-point in rococo silver.

Such an interplay of Dutch silver and Cantonese mother of pearl is extremely rare. Although, or indeed, for the very reason that Chinese decors had already been known in the Netherlands since the early 17th century, the Chinoiserie fashion, which held sway in England, France and Germany during the 18th century, largely passed over the Netherlands. As a result, such mother-of-pearl tea chests were doubtless a rarity in Dutch interiors.

When, in 1610, the Dutch East India Company began bringing a modest quantity of tea to the Netherlands, it was looked upon as a curiosity. It was not until later that the Company started importing large quantities of tea. The tea was first transported from China to Batavia (the capital of Dutch East India, today Jakarta), from where it in turn was shipped to the Netherlands. Once tea drinking had, in the 18th century, become commonplace, the East India Company began importing tea directly from Canton.

To preserve the aroma and flavour of the tea leaves, tea was normally kept in tea caddies. In aristocratic circles, silver tea caddies were used. In the mid-18th century, the tea chest became fashionable. it normally contained three caddies, in which tea and rock candy were kept, and was fitted with a lock. Most tea chests were made of veneered wood. Rare examples feature unusual tropical woods, such as Amboina. Exceptionally rare are tea chests of tortoiseshell or mother of pearl, imbued with an allure as rich and exotic as the tea they housed. This mother-of-pearl tea chest, with its handsome caddies, is a relatively early example of a tea chest with the silver caddies typical of those employed in the 18th century. The earliest example of a tea chest with silver caddies, dating from 1756, is preserved in the Rijkmuseum.

Rudolph Sondag (1726–1812) was one of the foremost Rotterdam silver smiths of the 18th century. During his long career – he was active from the time of his marriage in 1746 until his death in 1812 –, Sondag created numerous highly original objects while at the same time adhering to prevailing fashions. Of particular note is a chest made entirely of silver with silver tea caddies, dating from 1771 (John Endlich Collection, 2010). In view of the fact that Sondag in 1796 became a member of the executive committee of the draughtsman’s society, Hierdoor tot Hooger. It can be concluded that he was a gifted draughtsman and, thus, that he himself produced the design drawings for his silver. These tea caddies with rococo decoration are superb examples of Sondag’s work.

Lady Charlotte Schreiber was a 19th-century collector of ceramics who in 1885 donated her collection to London’s Victoria and Albert Museum. A driven collector, Schreiber journeyed across Europe with her second husband, leaving no stone unturned in search of additions to her collection. She regularly came to the Netherlands, where she knew every small antique dealer in the country. Schreiber kept a record of all her purchases in a journal. After her death, her son, Montague Guest, published an abridged version of all her journals in two volumes, under the title: Lady Charlotte Schreiber’s Journals: Confidences of a Collector of Ceramics and Antiques throughout Britain, France, Holland, Belgium, Spain, Portugal, Turkey, Austria and Germany from the year 1869–1885. Although the tea chest in question is not mentioned in her journals, it is highly plausible that Schreiber did purchase it from a Dutch antiquarian, perhaps in Rotterdam itself, between 1860 and 1880.

Josef Hoffmann ( Pirnitz 1870-1956 Vienna) was one of the founders of the Vienna Secession, an artists’ group…

An octafoil shaped, embossed, silver-gilt “plooischotel”. The rim, fluted at intervals, is chased with flowers and foliage divided…

The back plate in decorated with embossed scrolling flower stems. In the centre at the top is an…