An important piece of Judaica.

The Sabbath lamp consists of eight different detachable silver parts and six detachable arms with removable candle sockets and wax pans and is shaped as follows:

2. a hexafoil-crown with a spreading, lobed rim, decorated with beading;

3. a baluster shaped arm holder with numbered slots for the arms covered by a domed removable cap with reading, mounted with a shaped silver screw;

6. an open seven-light oil lamp with incurved sides, the rim decorated with beading;

-A Shabbat lamp made in The Hague, 1764, presumably by Michel Derièe, is in the Rijksmuseum, Amsterdam 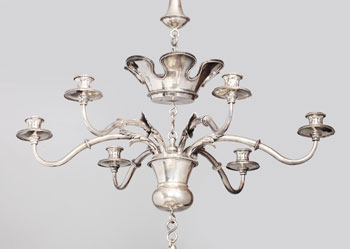 This object is featured in TEFAF Catalogue 2011