An octafoil shaped, embossed, silver-gilt “plooischotel”. The rim, fluted at intervals, is chased with flowers and foliage divided by swirling auricular ornaments. In the centre a repoussé plaquette depicting the story of Susanna and the Elders which based on a plaque made by Paulus van Vianen in 1612. 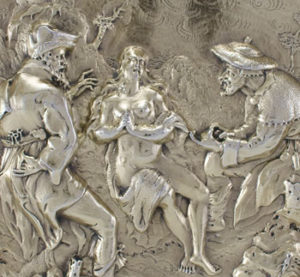 The story of Susanna and the Elders is an apocryphal addition to the biblical Book of Daniel. According to the biblical story, Susanna took a bath in the ‘privacy’ of her garden, without realising that two men, referred to as ‘the Elders,’ were spying on her. The Elders tried to seduce Susanne, but she resisted them. In revenge, the Elders accused Susanna of illicit behaviour, for which she could have been given a death sentence. Suspecting that something suspicious was going on, the prophet Daniel decided to interrogate the two men separately. The inconsistencies in their stories provided proof of Susanna’s innocence. Her waylayers were executed.

Plooischotels, nearly all of which date from the same period, were, as can be seen from contemporaneous paintings, primarily used for fruit. A simpler plooischotel appears in the Lottery Print of Durgerdam, dating from 1689. Here, it is referred to as a fruytschaal or fruit bowl. Plooischotels displaying fruit appear in genre paintings from the 1660s by Frans van Mieris the Elder and Gabriël Metsu.

Lucas Draeff, a native of Westphalia, was born in 1615. In 1642 he became a master of the Amsterdam silversmiths’ guild of Amsterdam. He married three times. First he married Geertruyd ter Meisen, widow of Hans Gerrits Schots. She already had a daughter, Margaretha Schots who married the well known silversmith and medallist Juriaen Pool. The few extant works of Draeff show that he was an eminent craftsman whose chasing reveals as high a degree of skill as his engraving. He excelled in the treatment of flowers.

This dish shows eight different flowers. All are executed in the most delicate manner. The combination of flowers with supple scrolls and lobes makes it one of the richest examples of Dutch baroque art in silver. German influences as well as those of Van Vianen and Lutma are evident.

It is thus with good reason that this plooischotel is regularly mentioned in the literature as an extremely early and exuberant example of silver in the so-called Dutch flower style, which prevailed particularly in the 70s and 80s of the 17th century. Even in respect of English silver, this platter is referred to as the continental prototype. 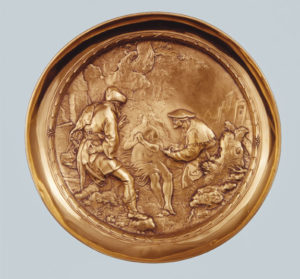 Tazza, Paulus Willemsz. van Vianen, 1612
Museum Boijmans Van Beuningen, Rotterdam
(inv. no. M.B.Z 196)[/caption]Baroque fire-gilt silver dishes are extremely rare. A few examples are now in the collection the Armoury of the Kremlin Museum in Moscow. They were brought to the Tsar as gifts by the embassies of 1648, 1665 and 1676.

The scene on the plaquette depicting Susanna and the Elders was based on a plaquette by the renowned silversmith, Paulus van Vianen, dating from 1612, today preserved in the collection of Museum Boijmans van Beuningen. In view of the fact that the plaquette was in the possession of King Charles I of England as early as 1640, it is improbable that Draeff ever saw the original.

Various lead and bronze casts were also made from Van Vianen’s works. These were not generally made with collectors in mind, but, rather, were primarily intended to serve as models for silversmiths, who kept them in their studios. Numerous paintings and other depictions of silversmiths’ studios show such plaques hanging on the wall. It can be stated with certainty that Lucas Draeff used such a cast.

Josef Hoffmann ( Pirnitz 1870-1956 Vienna) was one of the founders of the Vienna Secession, an artists’ group…

The back plate in decorated with embossed scrolling flower stems. In the centre at the top is an…

A pair of large silver candlesticks, each on a circular, slightly convex foot with an even rim supporting…